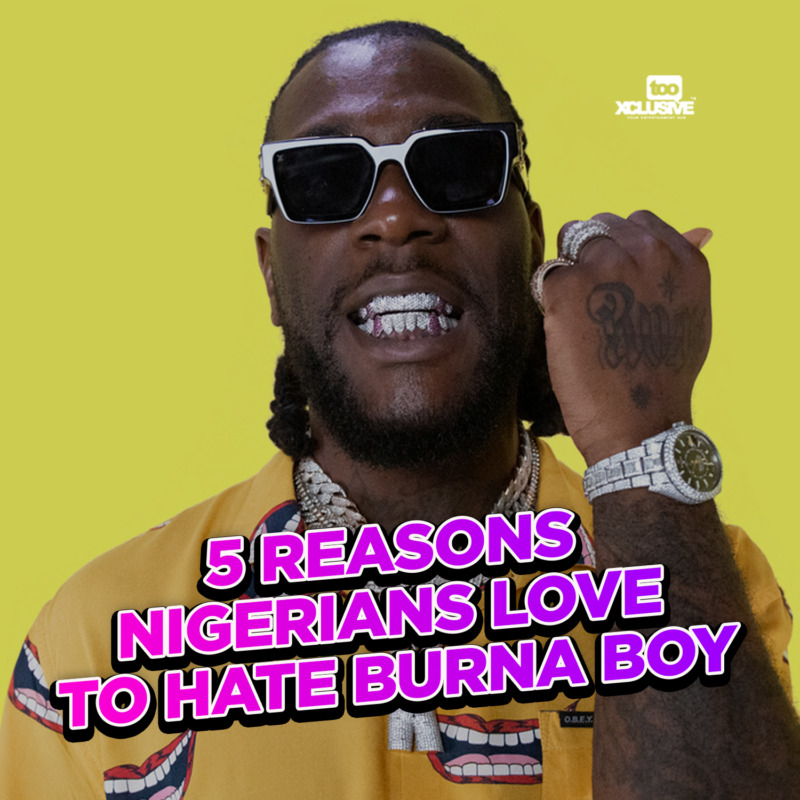 Over the years, Burna Boy has really not been a favorite celebrity and this is due to certain situations. The singer has been branded several names like “Low Budget Fela” “African Ant,” “Over-Rated Wallgecko,” “Obalende Odogwu,” “Ikorodu Lucky Dube” you name it, and interestingly, Burna himself understands why Nigerians dislike him.

He believes they hate him because he tells the bitter truth that they do not want to hear. “They Love me but they hate me because I tell them what they NEED to hear and not what they want to hear.” In this article, we would be highlighting 5 reasons Nigerians love to hate on Burna boy.

His Love For Fela

Burna’s love for Fela Kuti is unmatched. Burna Boy was only a kid when Afrobeat pioneer Fela Kuti passed away, but that was enough time for the “African Giant” to be inspired.  While several new music acts in the Nigeria music scene have sculptured their careers after the late Afrobeat king, from his manner of speaking especially in his songs to style of dressing, Burna Boy is arguably the next in line according to music critics. But Burna Boy does not feel the same even after saying the “Abami Eda lives In Him” and also heavily sampling his music.

The singer told GQ magazine that he doesn’t feel good about the comparison because it makes him feel “Weird”. “I don’t think anybody in their right mind would compare me to Fela. Fela is my inspiration and my childhood hero, so if you think comparing me to Fela is honourable, it’s actually not. It actually makes me feel weird. Fela was Fela, and if it wasn’t for Fela, there probably wouldn’t be any me, so I don’t understand the comparison.”

This statement further fueled hate from Nigerians because he appeared to be confusing himself and everyone. Another time was when he declared himself the best after Fela in a series of now-deleted tweets a couple of months ago. “FACT! I always knew I was, and I am THE BEST. Everyone you think is the best know I’m best since Fela Kuti,“But @timayatimaya told me something a long time ago that made me not care about being the best. The World can do without the Best” the world will still spin regardless.

NOBODY paved shit for me. Everybody dey finds them own. I bin out here if you knew the way they made us look weak by begging and paying the western world to like us you will see that no table was set and I’m the one that brought you the Respect you currently enjoy.”… SEE Tweet HERE

This caused Nigerians to call him out for sampling Fela’s music and claiming to be a different artiste. They believe he is not up to standard despite the powerful messages he shares via his music.

His definition of being “Real”

Burna Boy is notable for incurring the wrath of Nigerians on social media, especially the Nigerian Twitter, and in the end, he got fed up and left the platform. There so many times the self-acclaimed African Giant proved to be arrogant and narcissistic.. However, many have argued that Burna Boy is not proud but merely a confident man and unapologetic that knows what he wants, says whatever he wants regardless of the consequences – a bolder Fela.

His definition of “Real” is another major reason Nigerians loathe him. Burna considers himself to be a real one that says the truth no matter what the circumstances may be. A recent episode where he showed his realness was when Rema went wild on Twitter. The “Beamer” singer had taken to Twitter to address a number of issues including fellow musicians, his enemies, his fans and the Nigerian government.

In a series of tweets, he talked about how he was treated by some people in the music industry and what he had to do to get to where he is now. Burna Boy, who claimed he related to Rema’s tweets, hailed him for being “Real”. “It warms my heart to see that there is still a place for Real Niggaz in this weird world where lies are the new truth and spoilt kids and People who have never even been in a real fist fight in their lives are the new ‘Real Niggaz’. Adding “I’m so happy I had to come back on Twitter for 2mins. Big up Rema for been real bro. You really made my day. I dey for you Officially.” Burna Boy is blunt and honest but his own definition of real is not what we can relate with. Next!!

We wouldn’t say he derives joy in mocking Nigerians because as stated earlier, he likes to be blunt and “honest”. Burna Boy has taken it upon himself to scold Nigerians whenever they are slacking, not protesting, or for not speaking up against injustice. He has done this on several occasions most especially via his music. While reacting to the mysterious fire at the Accountant General of Federation’s office back in July, the singer mocked Nigerian youths for failing to take charge of the situation.

The singer said Nigerians should have called out the government the same way they dragged Funke Akindele over her house party. ”That same energy when una use wen dem take arrest Funke Akindele, make una use that same energy tackle una politicians,”.Burna Boy said Nigerians deserve everything they are experiencing in the hands of the government. “Accountant General office don catch fire, them don disburse fans, fire don catch. Everything wen Nigerians dey get, Nigerians deserve am,”

Even when President Mohammadu Buhari called the Nigerian youths lazy, the backlash he received was not as terrible as that of Burna Boy addressing the youths. They believe that the singer understands their plight but he needs to stop blaming them for it when he himself also can’t stand up and fear the Government physically.

Bragging about his music.

Burna Boy no doubt is super talented and Nigerians appreciate his music but they constantly have to hear him bragging about being the best. Claiming to be the best after Fela wasn’t the only time he bragged as he did the same just before his performance at Coachella.

You would vividly recall the Coachella brouhaha that stirred controversy on social media. The organizers of one of the world’s most celebrated music festivals, Coachella announced the complete line up of performers for its 2019 edition. With the likes of prominent international acts announced as headline acts, Nigerians were excited as two of its own; Burna Boy and Mr Eazi were also billed to perform on the Coachella stage.

To the dismay of Nigerians who were celebrating this feat, Burna Boy had a bigger concern on his mind, and that was with the character or font with which his name was written on the Coachella advert. According to him, he is an African Giant and he deserves to be treated like one.  “@coachella I appreciate you. But I don’t appreciate the way my name is written so small in your bill. I am an AFRICAN GIANT and will not be reduced to whatever that tiny writing means. Fix things quickly, please.”

Claiming to be the “African Giant” was the catalyst that really got people talking. Does he really deserve the ‘African Giant’ title? He was later called out for coming from a place of limited understanding and having a false sense of entitlement as other acts like Kendrick Lamar, Asap Rocky, Seun Kuti, Azealia Banks, Frank Ocean, and a host of other international superstars appeared in small fonts. Burna doesn’t seem like he’s going to stop bragging any time soon.

You don’t dress Fela to the extent of wearing just briefs to perform at a show, smoke like him, sample his music, and go ballistic when people ask you to practice what you preach (O wrong now!). Just before independence day, Nigerian activist, Yele Sowore, invited the singer to join a protest which was scheduled to hold on Nigeria’s 60th Independence Day anniversary.

In the invitation made via his Twitter page, Sowore noted that the singer is often compared to the late legendary afro-beat musician, Fela Anikulapo Kuti. He further said that Burna Boy is celebrated by foreign media as a revolutionary musician but he has not done any revolutionary act like Fela whom he is compared to. Sowore wondered why Burna Boy has never led a protest in Nigeria and seized the opportunity to invite the “Wonderful” singer to join him in his protest.

“Hello @burnaboy, everywhere I turn people describe you as a revolutionary musician, the foreign media even celebrate you, compare you to Fela Kuti, but I am yet to see you lead anyone to a police station carrying a coffin for head of state! Join #Oct1stProtest #RevolutionNow,” he tweeted.

However, Burna Boy turned down the invitation saying that he does not trust any politician. He wrote: “Everybody is a Fela fan and supporter now that he is dead. Humans are so Funny, You politicians are ALL the same (especially in Nigeria) and Frankly, I don’t trust none of you.@YeleSowore.”

Following Burna Boy’s refusal to join in on the protest, many Nigerian Twitter dragged him for being one to talk the walk but not ready to walk the walk. Some opined that it is quite shameful that he samples Fela music, uses Fela’s lyrics to make money & rise to fame, but lacks the discipline & courage of Fela while others noted that Burna Boy picked what part of Fela he wanted as the late Afrobeat king was also a politician and he contested the 1979 presidential elections under his own Party, Movement of People (MOP).

Another set understood that he was not wrong for being skeptical as his decision not to protest is also very personal but since he constantly referred to the youths as cowards, he deserves all the dragging in this world. Simple! Still, on failing to practice what he preaches and being a hypocrite, Burna once mocked slammed his colleagues in the music industry who boast over their streaming numbers. The “Dangote” singer in a social media post stated that streaming numbers are not the reflection of a singer’s true worth or talent and no one should get carried away by them.

He went on to add that if viral songs like ‘Baby Shark’ and ‘Gangnam Style’ could have amazing streaming numbers then no one should get overly excited about the millions of views and listens they get on the internet.“This streaming shit be making people feel like they are actually talented. If joke things like “Baby Shark” and “Gangnam Style” can do more number than everyone, don’t think you are talented or respected because of your streaming numbers. Everyone with real working brains know what is a joke and what is real. Anyway, plenty talk no dey full basket. Let time reveal all.”

Interestingly, Burna boy did the same by posting about the achievements of his iconic “African Giant” album which included streams and you know what happened next, Nigerians gladly dragged him left and right

ARTIST OF THE WEEK 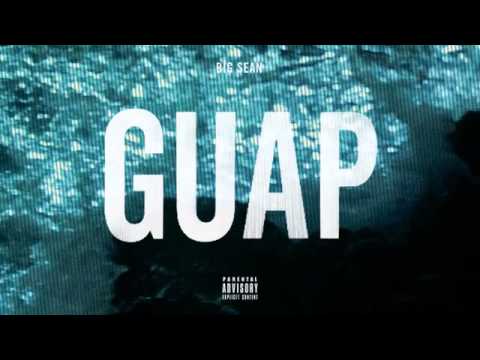 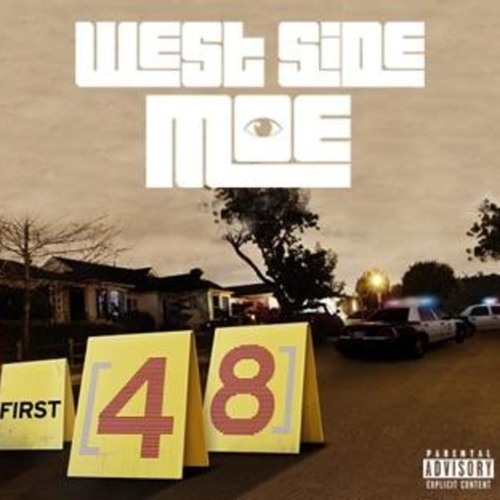 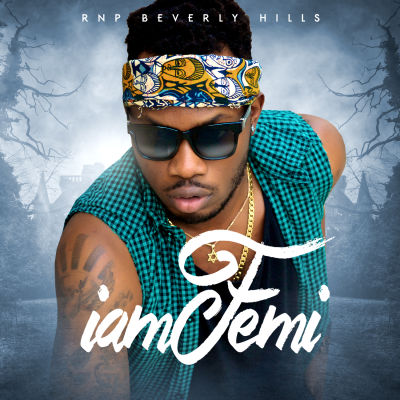 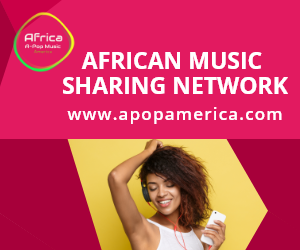